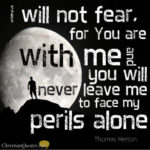 Recently, I had an AH HA moment about Jesus. When I have thought of Jesus being fully human and fully divine, it has always made sense to me that Jesus would have experienced the breadth of the human feelings. In the Gospel stories, I could identify and imagine Jesus experiencing feelings such as joy and grief, happiness and sadness, contentment, and even anger. As I read and reflected on the passion narratives, I also could imagine Jesus experiencing alienation, disappointment, hurt, and deep emotional pain.

Yet, for some reason I never thought of Jesus as experiencing FEAR. It is not that I rejected the idea, but I never equated the Prince of Peace with FEAR. That is until I was reading When Things Fall Apart: Heart Advice for Difficult Times by Pema Chodron.

Chodron defines fear as a natural reaction to moving closer to the truth. She says that fear can be the great teacher, but most of us do not take the situations that cause us great fear and anxiety as teachings, rather as she writes, “We run like crazy. We use all kinds of ways to escape-all addictions stem from this moment when we meet our edge and we just can’t stand it. We feel like we have to soften it, pad it with something, and we become addicted to whatever it is that seems to ease the pain.”

As I read that section in the book, I put down the book for the moment, and I thought about all the ways that we as humans run when we are faced with our fears. I was also thinking about the rhythm, the movement, and the stories of Jesus that we reflect upon during Holy Week. Suddenly I thought, “Jesus never ran from fear, he was willing to stand in the midst of it, instead of fighting, he calmly moved through it to the other side.”

The thought took me by surprise. I began to think about Jesus in the Garden of Gethsemane. What if Jesus wanted the disciples to stay awake with him, because he was anxious? When Jesus prays, “My Father, if it is possible, may this cup be taken from me. Yet not as I will, but as you will,” what if he is acknowledging his fear and asking God to help him face it?

In When Things Fall Apart, Pema Chodron also tells the story about one her mentors, Master Rinpoche. He often told the story about going to a monastery when he was still quite young.

When they arrived, no one was there to meet them, which was unusual, and there was this enormous dog chained up outside. It was a Mastiff with a big collar around its neck and it was very, very vicious, and Rinpoche and his attendants had to walk around this angry dog to get to the entrance to the monastery. The dog was frothing at the mouth, it was straining to get to them, and as they carefully made their way around the dog, the chain broke and it ran at them. Rinpoche said, “All my attendant monks ran away … and I ran right at the dog.” The children were all just shocked … their mouths were all open … Rinpoche paused for dramatic effect, and then he said, “And the dog was so shocked that it put its tail between its legs and ran away.”

When thinking about entering the city of Jerusalem for Passover, Jesus knew there would be those standing on the edges, at the back of the crowd, whispering, plotting, and scheming-devising plans to quiet him to stop the momentum and movement that this moment would surely create. He knew there were leaders who were intimidated by him, irritated by him, threated by him–that were frothing at the mouth to get rid of him.

Jesus knew he could run the other direction to preserve his own life.

Jesus knew he could quietly sneak into the city calling no attention to himself in efforts to keep death itself at bay.

Instead, Jesus made a grand entrance.

He came riding into the city like a King declaring that he was still the Prince of Peace. He faced the terrifying dog of death itself and ran at it full force, when it broke past the chains and came after him as they nailed him to the cross.

Why?  So that the people of God of every time, generation, and place would know there is nothing that we have to fear-not even death itself.

Jesus our King, our Savior, did not run away, but rather he faced it all head on.

He listens to the cries of all people–Hosanna…Save Us.

I have faced it all.

Nothing can overwhelm me or those who believe in me.

For Blessed Are the Ones Who Come in the Name of the Lord!

Blessed is the coming Kingdom.

Hosanna in the Highest.  AMEN!