Illinois South  Conference shares  the  inspiring  stories  that  show the  faith-filled  lives  within  our  Conference.  We  hope this  gives  you  comfort  during  this  time  of  sheltering  in  place.

If you know of stories that show people being the church, please send it to ISCspirit@iscucc.org. Share the stories that are warming your heart. #ISCspirit. 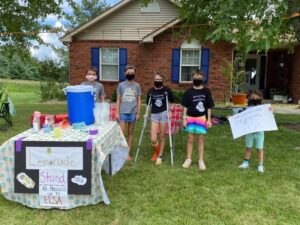 Waterloo St. Paul UCC Shows Its Spirit
Waterloo St. Paul UCC's Director of Faith Formation Jill Mayer, along with her husband Andy Mayer and their daughters Arabella, Juliana and Madeline, ran a lemonade stand last weekwith proceeds going to Elsa Wiemerslage’s family. Elsa and her mother, Adrienne, are both staying in Children’s Hospital as Elsa prepares for another bone marrow transplant in her fight against leukemia. The lemonade stand raised $700!
The church has supported the family in other ways as well, with meals for dad, Kevin, and Elsa’s younger sister and brother, Claire and Eli, along with other fundraising efforts. 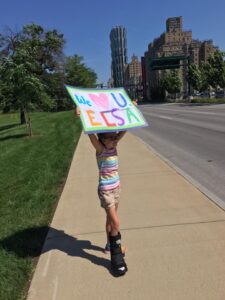 When the Mayers went to Children’s for a checkup on Juliana’s foot, they were able to offer support to Elsa from the street across from her window. Other families from the church have also held their own mini-rallies for Elsa to see.
A few months ago, Pastor Mike gave members a choice of him shaving his head, dying his hair orange or conducting a worship service wearing a T-Rex costume. They voted with their donations of money designated for the family. The T-Rex costume won hands down-or short arms up. Last Sunday, Rally Day, at the outdoor service, he wore the T-Rex costume, sort of a hazmat suit while the kids brought their backpacks and laptops forward for a blessing.
Atta St. Paul UCC girls and boys for your creativity and generosity.

Mascoutah St. John UCC Prepare Pillows, Pillowcases and Fleece Throws for Kindercottage
At a February "sewing day" a group of 40 people gathered to prepare pillows, pillowcases and fleece throws for the children of Uni-Pres Kindercottage. The group included several of St. John's Happy Quilters and many others.
In June, they packed three cars with the pillows, pillowcases, and fleece throws and delivered them to Uni-Pres Kindercottage in East St. Louis. The original plan was for all the quilters to deliver our load and meet the children and staff; however, they could only go into the entrance of the building. The Director of Kindercottage, Brenda Crisp, said that the donation was the best excitement for her staff as well as her students. The staff had a great time choosing specific pillowcases to match the children in their classes. The children received their pillows a few days later.

Ruthann Redmond has started a business that makes handmade masks. She also donates masks to healthcare workers. You can read about her efforts here. Ruthann is a member of Evangelical UCC in Highland, and she’s served on Conference Council. 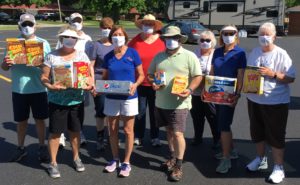 STOCK THE PANTRY DRIVE-THRU FOOD COLLECTION
On Saturday June 6, St. John UCC in Fairview Heights helped their community’s Food Pantry open by collecting food. The event was spear-headed by Nancy Eisenhauer and Jan Miller, members of the church. With help from the entire community, 510 items and $480 were collected in 2 hours. Pictured are the “crew” in their new church masks. Submitted by Rev. Rosemary Captain 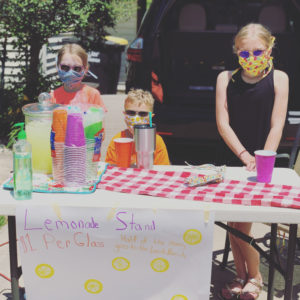 A few of Alhambra Salem UCC's children found a practical way of "being the church". The Luitjohan children (Emma, Nolan and Maddy) decided to have a lemonade stand and donate half of their earnings to Lunch Bunch sponsored by Salem UCC.

DuBois Center and Hoyleton Youth & Family Services have a long-standing relationship. One aspect involves food. At the end of each summer and in mid-December, the cooks at DuBois Center traditionally check for any food that is good but will likely go bad or be past the “use by” date before the next flurry of groups. Most of this food is taken to Hoyleton Youth & Family Services' residential home in Hoyleton. Door to door, it’s only about 24 minutes. This year, due to the camp closure, a mid-May delivery was added. Rather than go to waste, cases and sealed bags of everything from muffin and pancake mix to hot dogs and hamburgers were delivered to the main kitchen in Hoyleton. From there, the cooks from the various cottages divided it up and integrated the food into their menu plans.          Submitted by Shirley Asmussen

Thank You to the Steve and Emily Walton Family Foundation.  They sent a $5000 grant to DuBois Center, which will help the loss of summer camp income.

Thank you to the Hunger/Food Action Committee, who recently awarded grants of varying amounts to 23 different churches/organizations in our region.

New Athens St. John UCC
O’Fallon Weekly News recently shared a story about how many in our local communities are showing support for the medical personnel on the front lines of the fight against COVID-19. Their article also mentions one of our own, Tarrah Vaupel, a student pastor at St. John UCC in New Athens, who displays a lit red heart in front of her home. Click here for the story

Highland Community - Hoyleton Youth & Family Services
Hoyleton Youth & Family Services, a mission partner of Illinois South Conference, recently asked for locally made face masks. Highland resident, Jan Firth, had already made several for a local hospital, and when she heard about the opportunity at Hoyleton, she jumped in. Jan involved her extended family by asking them to find elastic at local stores for her creations.  The Machine Shop in Highland donated 25 yards of elastic to the cause.  In short order, a Hoyleton representative picked up 70 handmade cloth face masks for their staff.  We are thankful to Jan and her family for supporting our friends at Hoyleton.

Marine UCC
A mother and her four-year-old daughter from the Marine congregation have been spreading some joy each week while in quarantine. They mail letters to great grandparents, mail paintings to local nursing homes and send coffee gift cards to nurses who are working so hard right now. They're looking for more ways to offer a "pick me up" to folks within their community that might need a wave through a window, or even some doughnuts left on a doorstep. Their goal is to stay positive and spread joy, while sharing how important it is to be kind to others.  Shared by Rev. Phil Kershner, Marine UCC 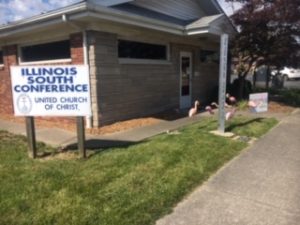 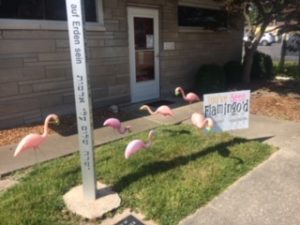 Illinois South Conference - Flamingo'd!!
Collinsville St. John UCC held a fundraising event to raise some money for the youth group of the church AND to add a bit of joy to all of us. The participants could donate money and specify who would be graced with pink flamingos in the yard. It would make smiles in the community and funds for the youth group. 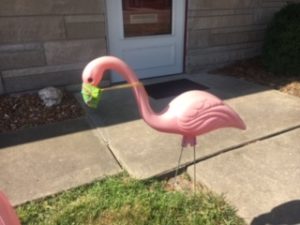 We hope you smile while viewing these photos. If you want to find out more about the fundraising program, contact Pastor Katie Jo at pastorkatiejo@stjohnucc-collinsville.com.  Notice, the flamingo wearing a mask! 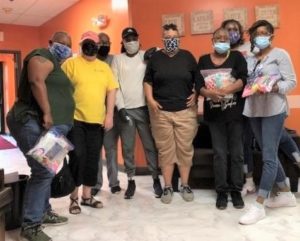 Uni-Pres Kindercottage is now open, but with a changed environment. Children must wear masks and shoes cannot be worn in the building. Because of this, members of Illinois South Conference churches have been helping to maintain the new normal. Rev. Carol Shanks (Shanks is in the yellow shirt, and Kindercottage staff joins her.), Pastor of Bethel UCC in Cahokia, delivered masks made by Kathy Asselmeier, member of St. John UCC in Maeystown, and Kathy Harres, member of St. Paul UCC in Columbia, for the staff and children.

Rev. Ivan and Viv Horn surprised the staff with more masks and bags made by Vivian Horn and Diane Mertz, members of Friedens UCC in Hecker. Since staff and children can't wear shoes indoors, they will place shoes in the bags outside each of their lockers. Thank you ladies for your wonderful donation. (Vivian is on the far left, and Brenda Crisp is in the middle next to a staff member.)

Evangelical UCC in Highland sent a $5,000 Hallelujah Grant to DuBois Center. The church started the Hallelujah Grants to help people or organizations with projects they wanted to do. Folks there knew DuBois could use some financial assistance right now, and their IMT team approved the grant. Several grants have been approved during the COVID-19 pandemic, including some to members in need. Thank you so much for the gift to DuBois, Evangelical UCC! Submitted by Rodney Knackstedt 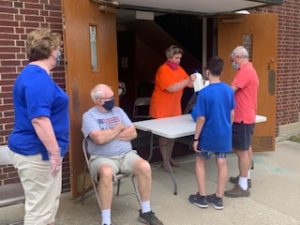 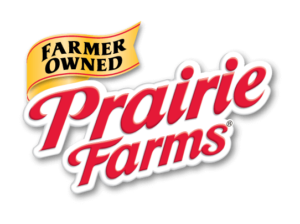 St. Paul in Nashville is teaming up with Prairie Farms to provide free milk.  Every Friday in June. Prairie Farms is providing St. Paul with half gallons of 2% milk that can be distributed free to people in the community as well as shared with our Region 7 food pantry.  People can come to the church to pick it up themselves, or if unable to come, volunteers deliver to their doorsteps.  In April, St. Paul joined with Maschhoff Farms to provide local families with free 15-pound boneless hams. All this is part of St. Paul's mission to change the world one life at at a time. Submitted by Rev. Bev Kahle 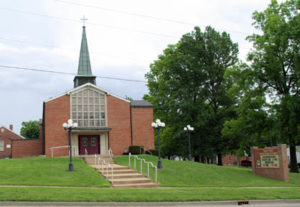 St. Paul UCC in Lebanon sent email cards to all the mothers in their congregation for Mother’s Day to let them know they were remembered and appreciated even in a time of social distancing.                    Submitted by Rev. Don Wagner

Zion UCC in Marion recently made the news for all they’ve been doing in the community during the pandemic. The Marion Star and a local car dealership started airing videos of all the ways Marion has been supporting each other, and Zion was the first to be featured. Click here to see the video on The Marion Star’s Facebook page. Submitted by Rev. John Holst

Zion UCC in New Baden joyfully attempted their first online worship on May 3. Zion is designated an essential service in their area because they house the only food pantry in the area. Their office manager Austin Newton keeps that vital ministry going. 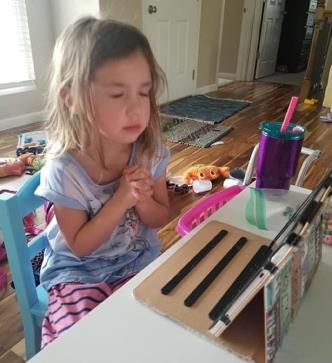 Alhambra Salem UCC
One of Alhambra Salem UCC's youngest parishioners is seen here with her hands folded in prayer in front of her iPad, virtually worshiping along with Rev. Jeremy Wood and the Salem Church faith family on Palm Sunday. "Hosanna, loud Hosanna, the little children sing..." 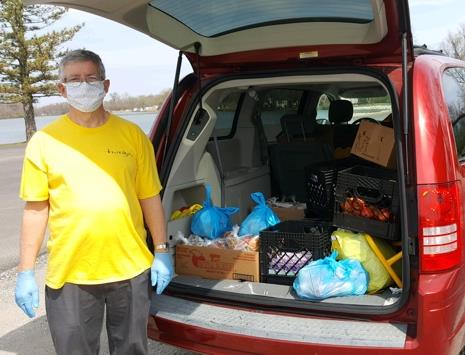 Cahokia Bethel UCC
David and Carol Shanks handed out lunches with TWIGS in Granite City to reach children who live on the outskirts and don't have a way to visit one of the Granite City schools that distribute lunches. They are doing the essential work of keeping kids fed while wearing protective gear and limiting interaction time to an absolute minimum. Bethel UCC in Cahokia is assisting these children with weekend food.