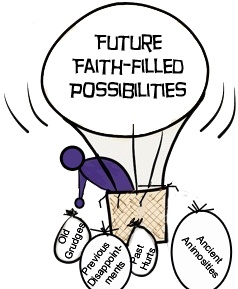 What are we still carrying?

As I work with churches, I am often surprised by the stories I hear of the things they are still carrying from the past.

When I hear or sense deep bitterness or resentment in their stories, I often try to seek clarification about the full context of what happened, when it happened and why it happened. What has surprised me the most is that even when people can no longer recall all the details or the specifics of what happened, they still carry the pain as if it were a fresh wound. They have not been able to simply let it go and move on.

This reminds me of a beautiful Zen story about two monks, Tanzan and Ekido.

Tanzan and Ekido...were walking along a country road that had become extremely muddy after heavy rains. Near a village, they came upon a young woman who was trying to cross the road, but the mud was so deep it would have ruined the silk kimono she was wearing. Tanzan at once picked her up and carried her to the other side.

The monks walked on in silence. Five hours later, as they were approaching the lodging temple, Ekido couldn't restrain himself any longer. "Why did you carry that girl across the road?" he asked. "We monks are not supposed to do things like that."

"I put the girl down hours ago," said Tanzan. "Are you still carrying her?"

Even in the early church, I believe the apostle Paul saw situations in which people were still carrying and holding on to past hurts. In his letter to the church in Colossae, he writes this simple and profound challenge, "Bear with each other and forgive one another if any of you has a grievance against someone. Forgive as the Lord forgave you." (Colossians 3: 13-14)

In order to move forward to a new future God has in store for us, sometimes it is important to first ask and answer honestly...What are we still carrying?