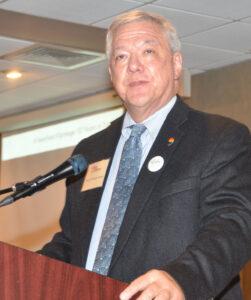 Last week Susan Petruso came to the Conference office to present us with a gift. Susan is the sister of the late Rev. Douglas Anders. Rev. Anders was the interim Conference Minister in our Conference after Rev. Sheldon Culver retired and I arrived. After being the interim, Douglas also served as sabbatical pastor of Zoar United Church of Christ in New Hanover and interim pastor of Concordia United Church of Christ in Belleville. Even though he spent a relatively short amount of time in the Illinois South Conference, he touched many lives, including mine, who will never be the same because of Douglas.

Through his estate planning, Douglas made sure a generous gift was given to the Illinois South Conference. Because of his partial care and heart for seminary students and local church pastors, his gift will be split evenly between our Member in Discernment (MID) fund and our Clergy Assistance Fund. In this season of giving, we also remember the ways the saints of God, like Rev. Douglas Anders, gifted us with the presence of Christ through his kind and generous spirit.

Instead of sending a check in the mail from Douglas’s estate, Susan came in person, because, as she said, that was what he would have done. She read something she had written for the occasion of which I would like to share with all of you. Her words are a powerful reminder of the impact one person can make.

“In 2015, my brother, Douglas, retired and returned home (St. Louis) after 18 years as a local church pastor and 8 years as Conference Minister in South Central Conference in Houston, Texas. He stayed active in local and civic groups as well as the ministry. After his retirement, in 2015, Eden Theological Seminary granted him an Honorary Doctor of Divinity degree.

Also in 2015, Douglas got his first colonoscopy, and it was then discovered that he had stage 4 colon cancer. He fought his cancer for over 5 ½ years, traveling to MD Anderson in Houston, Texas, for experimental drug treatment.

In March 2020, when COVID hit, traveling to Houston became too hard. Douglas started treatment in Memphis, Tennessee, in late 2020, but cancer had spread throughout his body. Douglas never had a pity party when he was told he had cancer. He just knew he was going to beat it. But cancer won on that cold dreary day, March 22, as Douglas was surrounded by his family in his home.

If you were the fortunate ones who knew Douglas, you were a better person knowing him. He had so many attributes, and he was filled with the Fruits of the Spirit, which are love, joy, peace, patience, kindness, generosity, faithfulness, gentleness, and self-control. Douglas loved God, God’s peoples, and the United Church of Christ. His generosity lives on after death. Through the many gifts he left to churches and organizations, as well as the scholarships at Eden Seminary and Deaconess Nurse Ministry in Douglas’s name, his legacy will live on.

I learned after Douglas’s death that he told many people to get that colonoscopy, so as my parting words, I likewise encourage you all to take care of yourselves, and your health, and be sure to get a colonoscopy.