Christian author Craig Dykstra describes the feeling of being overwhelmed as

“By the sheer hugeness or complexity of something. We can’t get our arms around it. We can’t get it figured out. We are unable to organize it or to bring it under control. It makes us feel…small, weak and inadequate.”

OVERWHELMED. We have all been there. Maybe you have been recently…this week, yesterday or even today. I believe that is exactly where the disciples were as the Gospel of John describes the scene in John 20:19  “On the evening of that first day of the week, when the disciples were together, with the doors locked…”

It was the week after... Jesus had been welcomed like a King, celebrated then betrayed, arrested, accused, tortured, put to death and then taken off the cross, body anointed, sealed in a tomb and then…seen by some of the disciples as ALIVE!!

When Jesus went into the tomb, so did their hopes, their vision, and their sense of direction and purpose. What were they left with? I would imagine an OVERWHELMING sense of failure, loss, and shame. Some had deserted him

Some had betrayed him. Some were sure that they disappointed him. All were disillusioned. 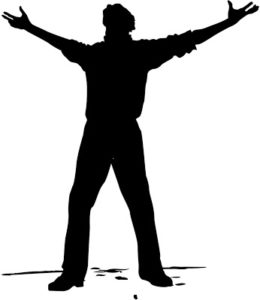 “Ok, but wait a minute,” you might be saying to yourselves.  “Come on, I can understand that they felt this way at the crucifixion and after his death.  Some of the disciples actually saw the risen Christ! True.  Yet, what I think is so compelling and powerful about the scene that is painted for us in John 20 is a real, gritty truth of humanity.   Many people are not able to receive the good news quickly if at all. Too many people get stuck in a moment. They get stuck in the OVERWHELMING nature of life.

The truth is life is hard.  Life is full of the unexpected.  Life can be full of heartbreak and disappointment. When we are overwhelmed, we hide behind our own locked doors because it seems easier and more secure. Yet, like the disciples, the difference of whether or not we will remain behind locked doors or whether we have the courage to get up and walk out the doors to face life again for us as believers comes down to ONE THING.  Will we be able to receive the peace and presence of the Risen Christ in our midst even when life is hard?

Despite their overwhelming fears, the Risen Christ appears to the disciples.  In John 20: 21 it says, “Again, Jesus said, ‘Peace be with you! As the Father has sent me, I am sending you.  And with that he breathed on them.”  This act of Jesus breathing his Spirit, his Holy Spirit, upon them is an act of commissioning them.  He gives them his Peace, his Forgiveness, Grace, and Mercy.  Yet, they must receive it in order to move forward. The same is true for us.

Jesus through the power of the resurrection gives us HIS peace, HIS forgiveness, HIS grace, and HIS mercy. He stretches out his hand to pull us from the OVERWHELMING circumstances of our past and present. However, we must take hold of His hand. We must let go of the past and receive the future He has in store for us. If we do, we will discover what it means to be alive again. We will be alive, because He lives.