When I was still a parish pastor, I was a lectionary preacher and, as such, there were times when I would come to a particular biblical story or passage and say to myself, "Oh no! I don't want to preach on that." For quite a long time, first Samuel - the seventeenth chapter was an example of this. David and Goliath was one of my least favorite stories.  Perhaps it was because of how it was taught to me as a child and/or the disturbing ways I remember it illustrated in my Children's Bible.  Yet, mostly, it was because I was unsure about how to invite people to reflect on this story without running the risk of conjuring up images that seem to condone war, violence, and triumphant theology.

But then I had an "ah-ha" moment. It centered around the point at which David, while preparing to go into battle, makes an important discovery about himself. He makes a brave choice which changes everything. If you remember the story, you remember no one was willing to face Goliath. This is when David comes on the scene. David steps forward and says to Saul, "I can do this." Yet Saul quickly replies, "You? You are not able. You are only a boy."  I imagine, at the moment, Saul is doing what many do. He looks at David through the lens of his own experience, his own perception of what should be and asks, "But who are you?" Saul questions David's motive, his credentials, his preparedness, and his authority. "But who are you?" It is a question that each of us will be asked through our lives as individuals and even as churches. This is why I believe David's response can be informative, affirmative, and life giving.

Listen to how David responds.

I am one who has been keeping his father's sheep.

I am one who has been there when a lion or bear came along.

I am one who went after the beast to protect the sheep.

I am one who rescued the sheep from its mouth.

I am one who God delivered from these dangers.

I am one who is certain God will deliver me again.

David speaks clearly and without apology about who he is and whose he is as a servant of God. I find it telling that Saul hears David's truth and he simply responds in saying, "Go and the Lord be with you."

Yet, that is not the end of the story. It usually isn't when it comes to our own internal authority. Saul, perhaps with the best possible intentions, seeks to prepare David for what lies ahead of him. Since Saul only knows the world from his experience, he considered what he would do if he was going into battle...he would put on his own uniform. As the scripture tells us, Saul dressed David in his own tunic. He put a coat of armor on his body and a bronze helmet on his head. I think Saul's act is a very common one...in trying to help David he ended up dressing David in his own image. I think we have all been guilty of it at times. I know I have.

As David walked around in Saul's shoes for a moment, he quickly realized that they did not feel like him. David knew himself well enough that he knew he would not be comfortable being anyone but himself. For me, this is where the story gets good and has much to teach us. David tried walking around and then finally says to Saul, "I cannot go in these, because I am not used to them." In other words, he is saying to Saul, "I cannot go into this situation being you. This is not me. I only know how to be myself." 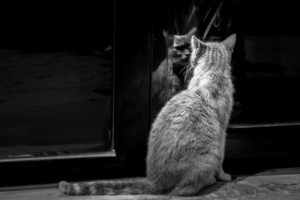 Even though it is risky, even though it can take great courage, as individuals and as churches, we need to hold onto that voice when we must face our own giants, whoever or whatever they may be. As prepared to walk into the unknown places of our lives--fearful or excited--I believe God wants us, like David, to be who we are and whose we are. Then and only then are we able to stand tall and allow God to work through us.

Finally, consider this. After David told Saul, "I cannot go in these." he then took off Saul's armor, picked up his own shepherding staff and headed to the place he knew best. He went to the stream, where he had led his sheep to drink. He bent down and chose five smooth stones. He put them in the pouch of his shepherding bag, and with his slingshot in his hand, he went to literally approach the situation face to face.

David was able to have the confidence to face a very scary situation because he drew from his own experiences, his own knowledge, and his own internal resources. He used the tools of his trade. What prepared him most for the moments ahead would be that, at that particular moment, he knew who he was and whose he was.

As God calls us forth to be servants of God, there are certain to be people in our lives that will turn to us, as Saul did to David, and say, "You cannot do this. You are only...(fill in the blank)." They may question your preparedness, your credentials, your style, your leadership, or your beliefs. They may try to dress you in their own image. They may try to offer advice, direction, resources, or tools that do not seem fitting for you.

May you be able to find the same courage and strength David did when he took off the clothes someone else wanted him to wear, walked to the place he knew, and chose five smooth stones in order to face the giant. May you, too, be able to find your own strength in your life and calling to be able to boldly proclaim, "I am a servant of God, and the Lord that carried me before will carry me again."  Amen.