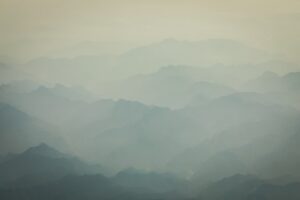 After forty years in the wilderness in which moment after moment, day after day, week after week, month after month, year after year, the people of God had experienced God’s provisions and power, they are still afraid. Just as they are at the cusp of entering the land God had promised them and their ancestors, the land described as flowing with milk and honey, they feel forsaken.

In realizing the limits of his health and humanity, Moses tries to prepare the people that the time has come for him to pass on the baton of leadership. After what I imagine was a time of deep prayer and discernment, God makes known to Moses who his successor will be. Joshua, a young man of faith, has been chosen by God to take the people across the Jordan River and take possession of the promised land. God called Joshua to accompany the people of God in what was next for them.

In the thirty-first chapter of the book of Deuteronomy, we can read the words of blessing, the words of the commission Moses gave to the people and Joshua himself. While we may recognize a few of the verses as motivational phrases that we have seen on plaques, t-shirts, or mugs, in my mind there is something lost in translation if we don’t consider the context of why these words were being spoken.

Consider these words of Moses in the presence of all Israel as he stands before them with Joshua by his side. “Be strong and courageous, for you must go with this people into the land that the Lord swore to their ancestors to give them, and you must divide it among them as their inheritance. The Lord himself goes before you and will be with you; he will never leave or forsake you. Do not be afraid; do not be discouraged (Deuteronomy 31:7b-8).” Moses speaks these words to a people who, in the beginning, questioned, denied, and resisted his leadership.

They groaned and grumbled that Moses had brought them to the desert to die. While they insisted his leadership and guidance were so awful that they were better off as enslaved people in Egypt, Moses wrestled with God wondering why God had chosen him to lead such a complaining, stiff-necked people. Frustrated and forlorn, Moses would weep and pray, begging and bargaining with God to send someone else to lead them into the unknown. Each time, buoyed by the Spirit and power of God, Moses would return to face their questions and doubts with assurances of the countless ways God had provided for them before and would provide for them in the future.

So, imagine the irony when Moses shares with the people that he has taken them as far as they can go, and the same people who have questioned, doubted, and fought his leadership was now saying, “But Moses, what will we do without you?”  Imagine the irony of the accolades and praise they must have bestowed upon him knowing his departure was imminent after there were times when they wanted to overthrow him. Eventually, the people come around to trust in the fulness of the promises of God. They experience the provisional nature of God, like manna from heaven.

Moses was the one who had been called by God to work and enable them to carry God’s plans and purposes. And while I could imagine there was a twinge of disappointment in knowing he would not be the one to be a part of the next chapter of redemptive history, there was also a peace knowing Joshua would. Moses knew people come and go, and leaders lead for a season, not a lifetime; but the Lord's presence is everlasting.

And so, it is true for us. It is true for the church. This is incredibly important to remember in times of leadership transition and change. Just as in the past, God has provided those who will accompany us on our faith journey; God will do so again in the times to come. Those called to serve, whether they be a Moses or a Joshua, do not do the work alone. It is the work of the whole people, directed and ordered by God.

The assurance of Moses to the people of God then is still needed for the people of God now to remind us we are not alone, especially in times of transition and change. Remember this promise. Believe it. Trust it. And wait to be surprised at the ways God’s promises will continue to unfold. “Be strong and courageous…The Lord himself goes before you and will be with you; he will never leave or forsake you. Do not be afraid; do not be discouraged (Deuteronomy 31:7b-8).”

Dear friends, may it be so in your life and mine as well.